Big Blue Door was founded by Joel Jones and Jen Hoffman Jones in the summer of 2012 to create comedy and theatrical performance that finds and shares the human experience with wit, humor, skill, and candor. Our classes and shows combine the most innovative training anywhere with ongoing opportunities for original, exciting performance. Come see better, listen better, laugh louder, and maybe discover your own voice along the way.

We produce several original shows every month. Many of our classes and shows take place in our McGuffey Art Center space, Studio 20, on the second floor. 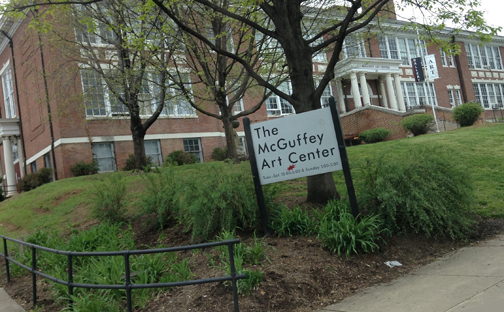 For a segment on Big Blue Door that aired on PBS, click below:

Season 1: 2012-2013
In the summer of 2012 Jen and Joel moved back to Charlottesville after several years in New York and launched Big Blue Door. We began our monthly Big Blue Door Jams, a story show with monthly themes. We started our website, created an LLC, Joel began teaching storytelling through The Bridge PAI and Piedmont Council for the Arts, and Charlottesville’s first longform improv courses through Live Arts.

Season 2: 2013-2014
In our second season recordings from our Big Blue Door Jams were weekly on WTJU‘s Soundboard, we taught our first independent improv classes at Directors Studio, our storytellers were published in a special Valentines issue of the Cville, and our shows were featured on an NPR segment. By the end of the year we put together Charlottesville’s first ever longform improv ensemble, The Lady Pills, which performed at the Magnet Theater in New York City. We also collected oral histories of refugees in the community as part of a Benefit for the local International Rescue Committee.

Season 3: 2014-2015
In our third season Big Blue Door joined McGuffey Art Center as an Associate Member, The Lady Pills performed as the opening act of the Richmond Comedy Festival, we introduced new teams and forms, and we began Big Blue Door Improv Night on the third Thursday of every month at Cville Coffee.

Season 4: 2015-2016
In our fourth season Big Blue Door joined McGuffey Art Center in Studio 20, Brian Weisbrod and Nauder Namaky launched our first indy show, OK Stupid, went on to become coaches for our performance groups, and joined with Joel Jones to form The Administration. We also upgraded our studio with sound baffles and lights.

Season 6: 2017-2018
In our sixth season we created Charlottesville’s first-ever all female improv group, Feminine Hijinks, created new improv forms Dish & The Living Room, began regular improv performances at The Bridge, and were featured on WHTJ’s Charlottesville Inside Out.

To keep up, why not “Follow” us by clicking the button on the upper right of our homepage, and “Like” us on Facebook? Heck, why not like us in real life by coming to our shows and consider taking a class!